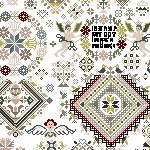 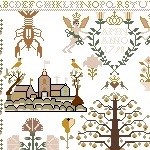 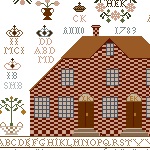 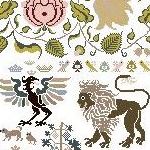 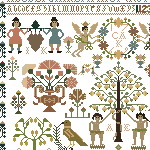 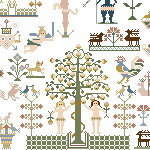 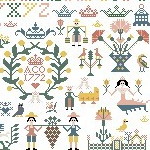 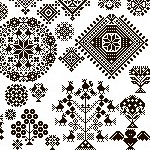 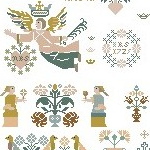 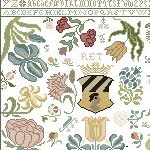 Needlework samplers from Northern Germany usually have the format of wide rectangles or squares with several rows of alphabets and numbers at the top and a nice border running around. There they resemble samplers from the Netherlands.

Many North German samplers as well as the Dutch ones display flower-pot motifs, very popular at that time, that were probably taken over directly from the tiles imported in thousands and thousands.

The close connection of needlework lessons (a main subject at that time) to the Protestant Church (after the reformation maiden schools were demanded in the regulations of the Church) is an explanation for the variety of religious motifs and symbols on north German samplers: Adam and Eve, Josuah and Caleb, Jacob's fight with the angel, Daniel in the lion’s den, the crucifixion…

In addition, one can find a great many of secular motifs from the schoolgirls’ experience on those works – such as ships, pieces of furniture, village views, working maids and farmhands.

Often the bright colours give a cheerful appearance to the North German samplers.

Exceptions amongst those samplers are formed by samplers from the Vierlande, from the marsh land around the town of Winsen south of the river Elbe and from the Stralsund area. 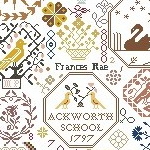 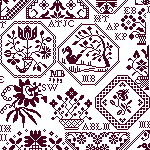 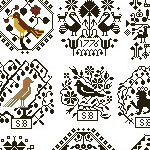 Ackworth is a town in the county of Yorkshire, England. A boarding school for London orphans was founded there in 1758. Until 1773 a total of almost 2700 children found a home there. The orphanage was appointed to take charge of weaving and spinning by textile mills in the surroundings, and some of the students had an on-the-job training there. In this way the students contributed to the school’s budget. When the government support stayed away, the orphanage closed.

The Quakers – they also call themselves the "Society of Friends" – bought the buildings in 1777 and founded a school, because there was much to be said for it: the positive impact of the Yorkshire countryside, the opportunities to practice agriculture, and the helpful neighbourhood.

The so-called Ackworth School admitted girls and boys from all over England. Since there were no holidays for years, many students stayed in Ackworth throughout their school days.

The ideas, the school is a family and the welfare of the community as a whole is the primary goal as well as the concept of simplicity and modesty influenced the young people. During their school time the boys worked in the farming, in the bakery and in the dairy. The girls were responsible for the laundry of the school, among other things, and took work as seamstresses. So anyone contributed his or her share to the means of the community.

All samplers that were made by the girls from Ackworth School in large numbers have one thing in common: They are unmistakable. 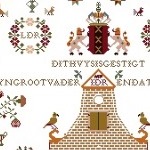 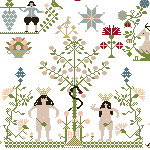